Abstract
Established in 1996, as Shanghai Five, the Shanghai Cooperation Organization (SCO) was initially considered a counter weight to the North Atlantic Treaty Organization (NATO). Nevertheless, despite the presence of extra-regional forces in the region over last eleven years, the forum has contributed little towards either regional stability, or exit of these forces from the region. This can be attributed either to the lack of military muscle on the part of SCO members, or deliberately, to avoid further destabilization of the region owing to the likelihood of confrontation. However, the forum has shown its concern over the expansion of extraregional forces. Internally, there is a requirement for increased integration at political, economic and security levels. The key partners: China as a rising global power; Russia as the resurgent super power, if taking a unified stance, have the potential to free the region from the influence of foreign powers. However, both pursue their own national interests and have their own stakes and economic and political objectives in the region. This internal politics of national interests, seemingly prevent the forum from presenting and acting as a cohesive body. Even economically the forum made more promises than its demonstrated performance. In the regional politics especially in Afghanistan1, and Central 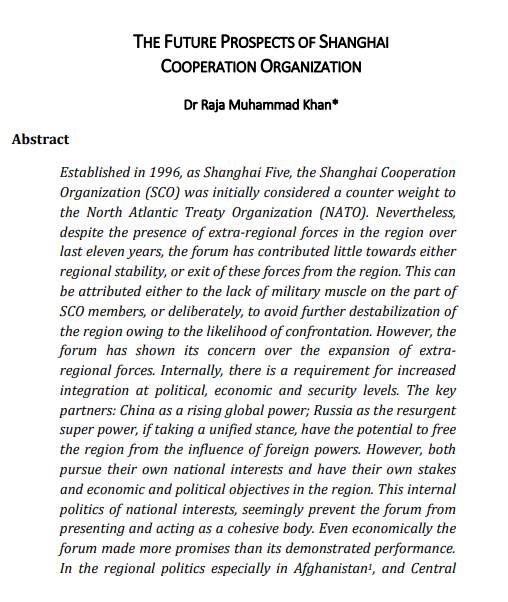