THE DETERRENCE VALUE OF PAKISTAN'S NUCLEAR WEAPONS: AN EMPIRICAL ACCOUNT

Abstract
This article aims at investigating the correlative relationship between Pakistan’s national security and its nuclear capability. In this endeavor, the prism of neo realism has been employed to logically explore and describe the character of Pakistan’s national security aspirations with nuclear weapons. Subsequently, this proposed correlative relation has been tested against four empirical accounts. Soon after its inception, Pakistan began to experience grave external security threats to some of its core values - political independence, sovereignty and territorial integrity. Pakistan employed various security tools of internal and external balancing other than nuclear weapons to protect its core values against the threats of war and coercion of India. But, it could not secure the intended results. For example, three major wars with India: 1948, 1965 and 1971 (disintegration of the country and creation of Bangladesh) challenged national security of Pakistan immensely. Further, post India’s Peaceful Nuclear Explosion (PNE) of 1974 strategic environment decisively influenced Pakistani decision-making elite to exploit the utility of nuclear weapons as a credible tool of internal balancing. Since the configuration of nuclear weapons in its national security policy, Pakistan has successfully neutralized the Indian strategies of war and coercion. For example, the accounts of Brasstacks 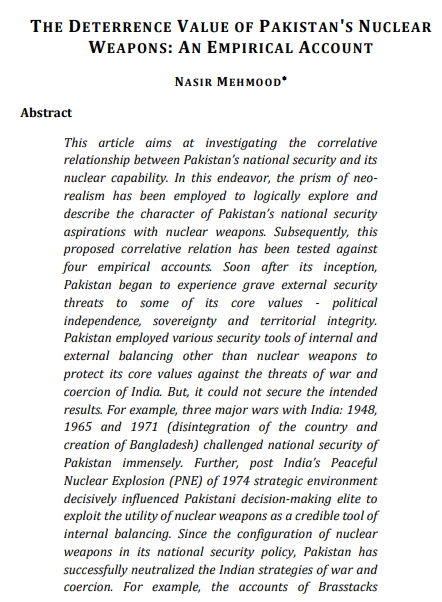