In the years following Prime Minister Narendra Modi’s ascent to power in May 2014, the Kashmir Valley went through massive protests, commonly called uprising or third intifada. Prime Minister Modi promised to reintegrate disputed State of Jammu and Kashmir into the Indian Union during the election campaign, championing an overtly hostile stance towards Pakistan. In the following years, major contours of the ruling right-wing Bhartiya Janta Party’s Kashmir policy has largely been grounded in unpromising assertiveness. Unexpectedly, a massive uprising erupted in the Kashmir Valley in 2016 which, despite oppressive measures by India, has refused to die down to date. On the other hand, the Line of Control (LoC) has also witnessed unprecedented ceasefire violations while India-Pakistan relations are touching the lowest ebb. This study argues that a policy of development without political engagement is a negation of the genuine political aspirations of the people of Indian Occupied Kashmir (IOK) and a denial of their fundamental rights.

Executive Director of Centre for Peace, Development and Reforms (CPDR), and Islamabad/Rawalakot based analyst. 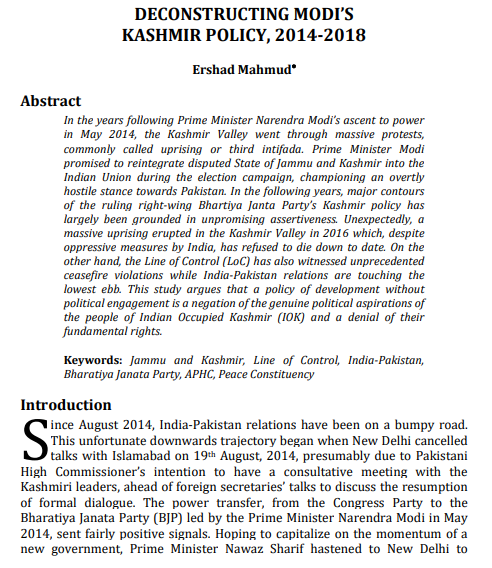