A serious humanitarian crisis has erupted in the wake of the Syrian war, which began in March 2011. A pro-democracy protest, which turned into a deep crisis, has taken more than 500,000 Syrians lives. According to a report by United Nations High Commissionerfor Refugee (UNHRC), in 2014 about 4.8 million refugees escaped to different countries of the Middle East, especially Jordan, Lebanon and Turkey, as well as Germany followed by Hungary and Sweden in Europe. In total about 1.5 million refugees are living in the 27 member states of the European Union EU). With the evolving refugee crisis worldwide, it has become essential for the two humanitarian agencies, United Nations (UN) and the EU to formulate policies that protect refugees’ rights and empower them with the basic provisions of life. This paper examines the role played by UN and EU in managing the Syrian refugee crisis, the policies pursued as a response and the challenges faced in return as well as recommendations for improving frameworks dealing with protection of refugees. 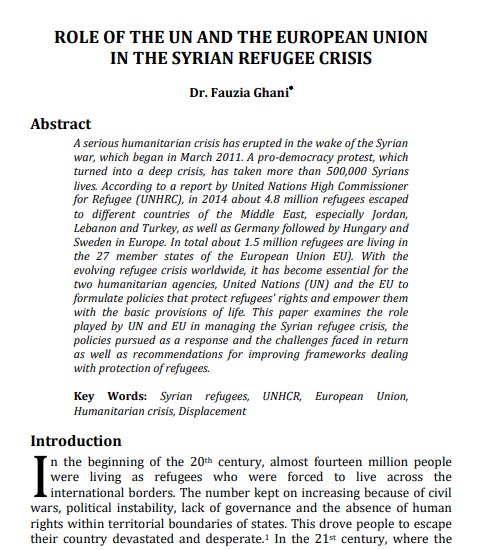 Ghani, Dr. Fauzia. 2016. “ROLE OF THE UN AND THE EUROPEAN UNION IN THE SYRIAN REFUGEE CRISIS”. Journal of Contemporary Studies 5 (2):37-51. https://jcs.ndu.edu.pk/site/article/view/70.
Download Citation