LIMITS OF INTERVENTIONIST POWER: A COMPARATIVE STUDY OF TRADITIONAL AND EVOLUTIONARY PARADIGMS

The ambient limits imposed by the various formal-legal and operational factors on the use of interventionist power by dominant powers condenses into three possible paradigms: (1) violence-based hegemonic interventions, (2) resort to covert operations and overthrow of regimes, or (3) major powers assisting the Lesser Developed Countries (LDCs) to develop economically. Violent or subversive intervention occurs when the international system is bypassed or manipulated by a major power or a group of major powers. Purely hegemonic projection of power is increasingly becoming irrelevant and anachronistic, and prone to gruesome violations of human rights. The evolution of effective and agile international economic and development agencies in the past sixty years makes the third possibility a favourable option. The formal-legal limits imposed on the use of coercive power by the UN Charter define the sailing boundaries for major powers, but difficulty is frequently encountered in defining such contested terms as, for instance, hegemony. Semantics leave ample room for arm-twisting and mounting of pressure. This paper posits that prospects of a long cycle of international peace would be greatly enhanced and chances of costly errors would be reciprocally reduced by a watertight international order that restrains and discourages such overt and covert interventions falling outside the ambit of the UN Charter. A stronger international regulatory environment will improve prospects for peace. Focusing on the socio-economic development of LDCs will lift third world populations out of the morass of living half-in-and-half-out-of-dirt. 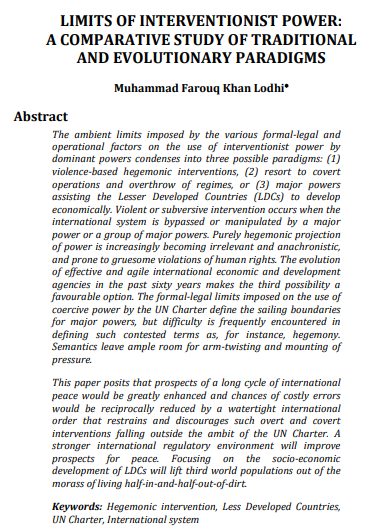