The rise of Prime Minister (PM) Narendra Modi to the corridors of power has perceptibly increased Indian hostility towards Pakistan. In the domestic politics of India, Bharatiya Janata Party under Narendra Modi has vehemently supported Hindu nationalism, commonly known as Hindutva, which brushes aside the ideals of secularism forming the basis of the Indian constitution. In the foreign policy realm, Modi’s government has adopted pragmatism in its relations with neighbours and the Muslim world except Pakistan. Hence there is rising Indian animosity towards Pakistan amidst the reinforced Hindu nationalism under PM Modi. The article examines role of Hindutva as well as pragmatism in Indian foreign policy under Modi from 2014 to 2019. It concludes that Hindutva is the driving force of Indian foreign policy towards Pakistan, rather than pragmatism.

The Five Principles of Peaceful Coexistence, known as the Panchsheel Treaty:

Non-interference in others internal affairs and respect for each other's

virtues), are a set of principles to govern relations between states. As given as

the stated foreign policy of India. “Revitalising Panchsheel,” Ministry of

book on page 84. This report declared that 68 people were found responsible

for the demolition of Babri Mosque. Most of them were the leaders of BJP,

prominent among them were L.K. Advani, Atal Bihari Vajpayee and Murli

Kashmir is a disputed territory between India and Pakistan. It is on the

agenda of UN Security Council, where plebiscite was suggested to exercise the

established right of self-determination of Kashmiris.

requested India to conduct joint investigation. However India called off the

process of comprehensive dialogue on the pretext of this terrorist attack.

District of Occupied Kashmir in which 40 Indian soldiers were killed. Sameer

A. Mohapatra, “Out of Saffron Ashes: Revival of Hindutva in India,” Honors

Vedas. The Samaj was founded by the Sannyasi (ascetic) Dayanand Saraswati

M.S. Golwalkar, We or Our Nationhood Defined (Bharat Publications, 1939).

R. Thapar, “Some Thoughts On The Present Situation,” in Communalism, Civil

Society and The State, by K. Pannikar and S. Muralidhara (New Delhi: Safdar

Zubaida Zafar, Shoukat Ali, and Sheeba Irfan,“Origin of “Hindutva” and Its

C. Shah, “Ideology, Strategies, and the Experience of Gujarat,” Warning Signs of

A. Mohapatra, “Out of Saffron Ashes: Revival of Hindutva in India,” Honors

A. Mohapatra, “Out of Saffron Ashes: Revival of Hindutva in India.”

A. Mohapatra, “Out of Saffron Ashes: Revival of Hindutva in India.”

C. Kinnvall, Globalization and Religious Nationalism in India: The Search for

Politics and Secular States: Egypt, India, and the United States (Baltimore: The

to Increase India’s Commercial Ties with The Eastern Neighbours, while

“How has India's economy fared under PM Narendra Modi?” DW,

In 2014 Modi contested elections from Vadodara in Gujarat, and Varanasi in

Uttar Pradesh. He won both but chose the Varanasi seat rather than the one

from his own state.

Doval is one of the founding members of the Vivekananda International

Kashmir and declared it a part of Indian union. To avoid Kashmiris’ reaction, 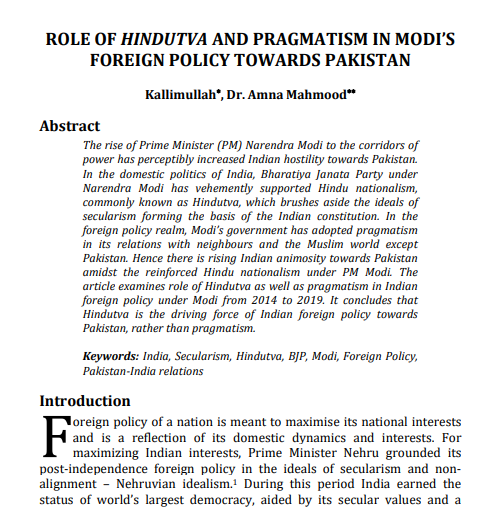