The paper analyses the U.S. President Donald Trump’s new Afghanistan strategy. It argues that the policy is flawed as it focuses on a military approach rather than a political solution for Afghanistan. It also does not address the internal vulnerabilities of Afghanistan, especially reconstruction and nation building. Afghanistan’s turmoil is essentially a product of internal dynamics of the country, which comprises of a burgeoning insurgency, ethnic and sectarian fault lines, religious extremism, rampant corruption and fragile governance institutions. The prevailing scenario is the result of more than 16 years of various military strategies employed by the US which failed to stabilise the war-ravaged country. Furthermore, suspicion and mistrust between Afghanistan and Pakistan have obstructed the peace efforts. Under the U.S. South Asia Policy, India has been given a larger role in Afghanistan while taking a dim view of Pakistan’s counter terrorism efforts. It has raised serious concerns in Pakistan. Against this backdrop, the paper examines the limitations of Trump’s South Asia policy, for Pakistan and what strategic adjustments the country needs to make in this scenario. It suggests dialogue among all stakeholders including the Taliban which is necessary for peace in Afghanistan. 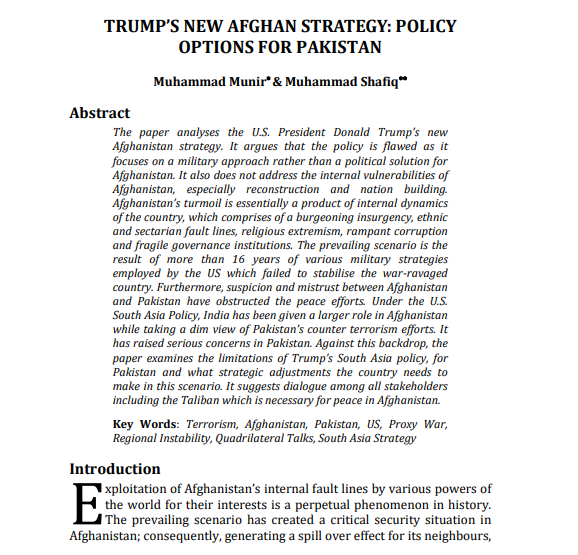