Abstract:
The emergence of energy resourceful Central Asian states as independent republics has attracted the attention of energy seeking countries. A geopolitical rivalry has been started between the West led by USA and the East led by Russia. Pipeline politics, alliance making and use of energy entities are being employed as means for diverting energy fuels of Central Asia. In this respect, owing to respective geographical location and subsequent interests, Pakistan and India support the southern directed energy pipelines. Consequently, although the prospect of Pakistan becoming an energy corridor is ideal but the planned pipeline projects i.e. TAPI and IP are being subjected to the geopolitical rivalry of the region. The contemporary geopolitics of the region projects a balance of power shift in favor of the eastern countries i.e. Russia, and Iran, because of their geographical contiguity and the consequent influence in the region. The existing realities predict militarization of the water resources along with continuation of authoritarian regimes in Central Asian States, as these can easily be influenced by the external stakeholders for their vested interests. 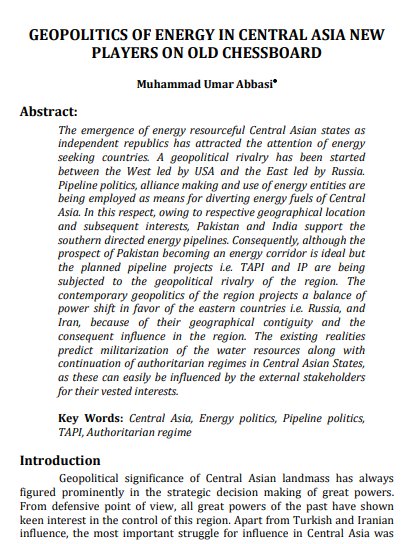