China’s Sea Power projection fundamentally contrasts with traditional Western thinking. The paper first looks into Mahan’s theory of Sea Power and then analyses China’s naval strategy and argues that China’s interest in developing naval capabilities is primarily economic and China has no ambitions of hegemony or expansionism and believes in freedom of navigation. It concludes that first, China has built its PLA Navy to secure the legitimate maritime rights and interests of China. Second, for resolving maritime disputes, China believes in diplomatic means of negotiation and  legal means by applying United Nations Convention of Law of Sea and other international maritime law. Third, China will not protect SLOCs and its overseas interests by acquiring naval bases and overseas possessions all over the world, but by establishing close cooperation with its strategic partners in different regions.

YOU Dongxiao, a PhD candidate, China University of Political Science and Law, a
Professor, the International College of Defence Studies, the National Defence
University, China. 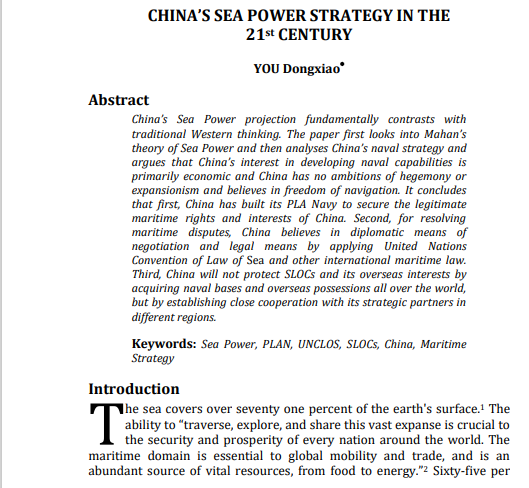