OPCW, “Convention on the Prohibition of the Development, Production,

Stockpiling, Use of Chemical Weapons and Destruction,” www.opcw.org.

OPCW, “Convention on the Prohibition of the Development, Production,

Stockpiling of Bacteriological (Biological) and Toxin Weapons and

Lewis A Dunn, “Can Al Qaeda Be Deterred from Using Nuclear Weapons?”

Center for the Study of Weapons of Mass Destruction, Occasional Paper no. 3,

the Murder of Former Soviet Spy Alexander Litvinenko,” Seminars in

Investigations and Toxicological Analysis of Remains of Yasser Arafat,”

the Poisoning of Victor Yushchenko,”Toxicological Sciences 125, no. 1 (January

VX is a fast reaction military grade nerve agent, which can destroy the

OPCW, Technical Secretariat, “Request for Information from State Parties on

The EU, “Directive 2017/541 of the European Parliament and of the Council of

March 2017 on Combating Terrorism,” Official Journal of the European

OPCW, “Fact-Finding Mission Confirms Use of Chemical Weapons in Khan

OPCW, “4th Special Session of CSP in the CWC Review Conference,” Report of

Regional and Sub-regional Organizations, and Other Arrangements.”

OPCW, “Overview of the Status of Implementation of Article VII of the

OPCW, CSP Session, “Proposals and Options Pursuant to Paragraph 21 of

Decision C-SS-4/DEC.3 on Addressing the Threat from Chemical Weapons

Namibia and Tuvalu have not signed the BWC.

but not yet ratified.

OPCW, “Decision: Addressing the Threat Posed by the Use of Chemical

Related to Nuclear and Biological Weapons and their Delivery System Act,

Zangeer Committee was originated in 1971 and its mandate remain restricted

to Art III.2 of NPT. NSG was formed on the premise of Art III-2 in establishing

supplier states. NSG is constantly evolving as per global challenges.

“Pakistan Applies for Accession to NSG,” The Express Tribune, May 2, 2016.

MTCR was established by the US, UK, France, Japan, Germany, Canada and

Abdullah Yousaf, former Chairman Central Board of Revenue, Seminar on

Related to Nuclear and Biological Weapons and their Delivery System Act,

Pakistan, Animal Quarantine (Import and Export of Animal and Animal 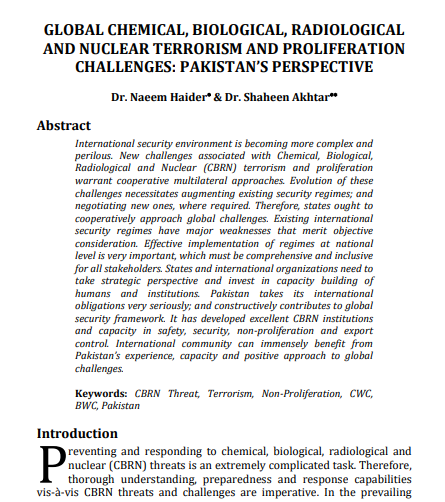