The strategies pursued by the U.S. to control violence, wherever national interest was threatened, saw significant challenges in the 21st Century. By juxtaposing Sun Tzu’s ‘Art of War’ (400-320 BC) to the U.S.’ policies in the Afghanistan and Iraq wars, the strategic follies of those campaigns can be better explained. The 'Art of War' argues that war is a matter of vital importance to the State; a matter of life or death; a matter of survival or ruin. Its thorough understanding is, therefore, an existential necessity. On the subject of understanding the enemy and one's own strategies, Sun Tzu prophesied that ignorance of oneself and ignorance of one’s enemy is a recipe for disaster. Sun outlines the fundamentals of strategy and tactics in a simple, ageless and succinct manner. At times he displays disdain for war by admitting the significance of the ‘evils’ of war-waging, without comprehending which wars can never be won. In brief, ‘Art of War’ is still relevant in understanding the criticality of ‘moral,’ ‘intellectual’ and ‘circumstantial’ factors of war. Failure in understanding these moral, intellectual and circumstantial factors led to the setbacks faced by the U.S. subsequent to the Afghanistan (2001) and Iraq (2003) invasions.

The writer is PhD scholar at the Department of IR, NDU, Islamabad. 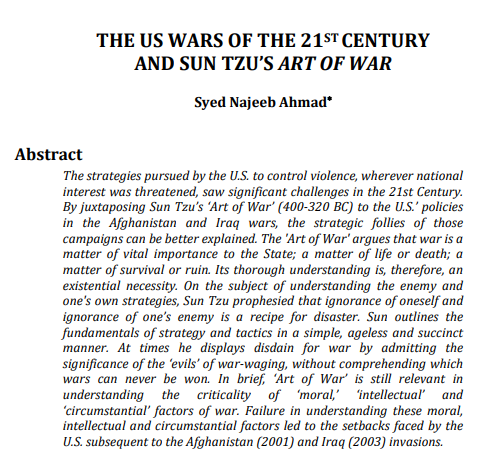